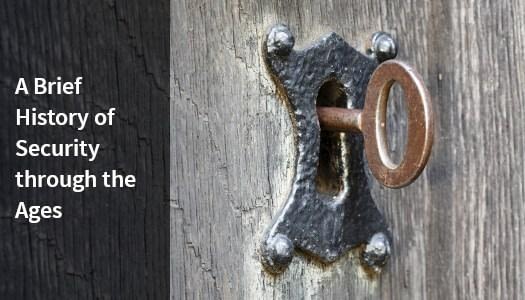 Security has changed a lot over the ages and thanks to developments in technology and science, it’s become a lot more effective and convenient for us. The great tried and tested security methods have stood the test of time, which we’ll touch on in this article.

Security of the Stone Age

As soon as humans first began having things of value, they wanted to guard it. Our early ancestors who spent a lot of time in caves did set up an early primitive security system, which they would be well and truly involved in. They used rocks, branches and whatever they could wield to defend their areas and property. Later when wolves were domesticated around 30,000 years ago in some parts of the world, they came to guard the home. In latter times came the guard dog which is still a form of security both for the home and business.

The earliest lock ever found was discovered in the ruins of the palace of Khorsabad of the city Nineveh, the capital of ancient Assyria. The ancient Egyptians continued with the lock, inventing an elaborate system of wooden pins on the outside of their doors. These were connected to bolts on the inside that held the doors shut. If you inserted the right key it would lift the pins and open the door or else the bolt would stay in place. These locks were used both in the home and at work. For extra precautions, the Pharaoh often employed night watchmen to keep watch over homes and towns. These watchmen would then alert soldiers of any dangers. The cat was a sacred animal to the Egyptians, and many believed it would warn its owners of a burglary through specific movements of its tail and body.

When the Romans came around, they adopted and improved the Egyptian locks by replacing wooden locks with metal. This helped prevent the door from being broken down. Metal made it easier to produce better keys. The Romans established a huge empire, so they needed lots of security to protect it against intruders. They came up with an early form of a padlock known as a puzzle lock. Designed as a burglar deterrent, it ensured that whatever was secured could only be opened with the correct key. This padlock was made of bronze, had patterns on it and was usually shaped into the face of a god. Many Romans, especially rich ones, kept guard dogs to guard their villas and shops.

Security of the Middle Ages

When you think of the Middle Ages, you generally think of castles and knights. These two did in fact play a big role in security. For more than 600 years, the castle and its knights helped protect European towns and people from raids and invasions. The Middle Ages gave us a number of security measures like the crossbow, arrow, moat and bridge to stop intruders getting across, along with high walls to make it hard for intruders to get in. Many towns in Europe still have their castle and moat with their high walls. They serve as a reminder that humans need to protect themselves and their property against theft no matter what age we live in.

Security of the Industrial Age and Victorian Era

The Industrial Age and Victorian Era was the time of much progress, discovery and innovation in many different fields. One of these fields was security. The Victorians developed high security locks that are still in fact used today. Their lock manufacturing was of the highest quality. They have become highly valued to collectors of antiques. During the Victorian era there was a lot of poverty in places like Britain, America and even Australia. This meant that theft and burglary was high.

Thanks to advancements in science and technology, security has come a long way. We now live with many different forms of digital security that help keep us and our property safe. Though tried and tested methods of a strong metal lock and a dog stand the test of time.

Twenty First Security is an Australian security system provider based in Melbourne, Victoria. We focus on providing high quality security products and services to suit, all at competitive rates. We’re passionate about helping people protect their property, whether it’s residential or commercial. Our team are readily available for security system consultations throughout the Melbourne metro and regional areas.